Welcome to my Blasts from the Past Blog 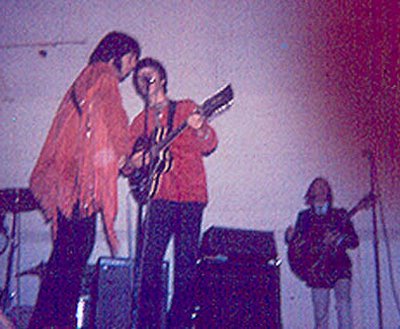 After I was contacted by someone asking about the King's Beach Bowl (Lake Tahoe, CA, venue that was popular in 1967-1968) I found some photos I took of Buffalo Springfield when they played there. That prompted me to start this new page with old stuff on it so I can keep my other page for current items only instead of wandering down memory lane (which might be fun for me but probably bores the hell out of anyone else) (but hey, this is all "my book about ME, right?"

Anyway, here is a picture of Steve Stills, Neil Young and Richi Furay from August 1967 in Tahoe. I scanned the slide and think I may have printed it backwards so I just reversed it.
Posted by Mizshely at 6:21 AM

Yep, it's reversed. Neil was on the left side of the stage. Steve was on the right side. Just saying. I was there both nights.

Yep, it's reversed. Neil was on stage left. Steve was on stage right. Just saying. I was there both nights. I believe I also drew the handbill. There was no poster.

Mizshely
I was there a LOT